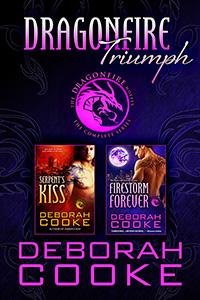 Dragonfire Triumph is the fourth and final digital bundle in The Dragonfire Novels: The Complete Series and includes the books that include the final victory of the Pyr in the Dragon’s Tail Wars between the Pyr, dragon shifters pledged to defend the treasures of the earth, and the evil Slayers, dragon shifters bent on destroying both the Pyr and the humans they protect.

In Serpent’s Kiss, Thorolf is targeted by the Slayer Chen to complete an ancient spell, and caught between love and duty. According to Chandra, his destined mate and a known thief, Thorolf’s partner Viv has lied to him and is allied with Chen. Worse, Chandra insists that the solution lies in Thorolf’s past. Can he trust the firestorm to guide him to the truth, even if it means bonding with a goddess?

In Firestorm Forever, Sloane, the Apothecary of the Pyr, is determined to save humans and the earth from a deadly plague brought into the world by the Slayer, Jorge. His only ally is Samantha, a researcher who hates the Pyr because her son was killed by the virus. When the firestorm sparks between them, can they move beyond physical attraction and their own emotional wounds to work together to save the world? The big finish to the Dragonfire series includes two more firestorms—those of Drake and Marco, the Sleeper—and the combined efforts of all the Pyr to defeat the Slayers forever. 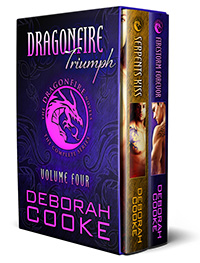