One act of passion can save the world…

Scientist Alexandra Madison was on the verge of unveiling an invention that would change the world. Then her partner was murdered, their lab was burned, and their prototype was destroyed. While Alex is in the hospital recovering from burns suffered in the fire, recurring dragon-haunted nightmares threaten to land her in the psychiatric ward, but she knows she has to escape to her lab to rebuild the Green Machine.

Handsome, daring, and impulsive, Donovan Shea is more than willing to do his part in the Pyr/Slayer war. Assigned to protect Alex, Donovan is shocked when her presence ignites his firestorm. He has no desire for a destined mate, but Alex’s intelligence and determination inspire him to join the fight to save her invention. With the Slayers closing in, Donovan knows he would surrender his life for Alex…and lose his heart to possess her.

“Those sexy dragons are back in the second chapter of Cooke’s exciting paranormal series…The intriguing characters continue to grow and offer terrific opportunities for story expansion. Balancing a hormone-driven romance with high-stakes action can be difficult, but Cooke manages with ease. Visiting this world is a pleasure.” 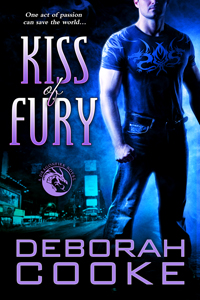 Buy a signed trade paperback copy of Kiss of Fury from Deborah! The price is in US dollars and includes postage to the US or Canada.

“The second book in Deborah Cooke’s phenomenal Dragonfire series expertly sets the stage for the next thrilling episode.”

“Riveting…Deborah Cooke delivers a fiery tale of love and passion…She manages to leave us with just enough new questions to have us awaiting book three with bated breath!”

“Deborah Cooke has only touched the surface about these wonderful men called the Pyr and their battle with the evil dragons…I am dying for more.”

An excerpt from Kiss of Fury:
Hell had swallowed her world.

Worse, there was nothing Alex could do about it.

The flames raged from every side, their orange tongues greedily devouring files, walls, carpeting. It was impossible, improbable that the lab should erupt in fire now. Mark had run through the flames into the lab, but he wasn’t coming back.

How long could it take to grab a hard drive?

Alex was going to go after Mark when someone laughed.

More than one someone.

For once in her life, Alex was cautious. She held a damp cloth over her mouth and listened. Her heart pounded and her palms went damp.
She heard the intruders fling open file drawers, heard the flames crackle as fuel was added to the fire. She heard computers crash and screens shatter. She heard the fire alarm ringing insistently as the smoke got thicker.

Then she heard them smashing the Green Machine in the lab. The sound infuriated her. Alex had worked years on this project and was within an increment of loosing it on the world. She had forfeited everything; Mark had mortgaged everything; they had begged and borrowed and it was within a single hair of paying off.

But someone was trying to destroy that dream.

Alex wasn’t going to let that happen. She ran out of her office and her first breath burned her lungs. The carpet in the corridor was in flames.

The file room had become an inferno.

None of it stopped her. She ducked her head, darted into the fire and headed for the lab.

Mark screamed. It was a wrenching cry of pain, a sound unlike anything she’d ever heard him make before. Nothing good could have prompted that scream.

The laughter grew louder, more malicious. Alex rounded the last corner in the corridor, confronted a wall of flames and braced herself for the worst.

Alex awakened abruptly. Her heart was galloping and there was a cold trickle of sweat running down her back.

She wasn’t at the lab.

She was in a cold and unfamiliar room. She was lying in an elevated bed and the lighting was low. Darkness pressed against the large window to her left. The walls of the room were a pale mint green and the furniture was stainless steel.

There were no flames.

She looked again, then exhaled shakily. Judging by the darkness outside the windows, it was the middle of the night.

But what day was it?

An IV hung at her side, the needle buried in the back of her left hand. There were bandages on her palms and she could feel her skin sticking to the gauze. She was sore, as if she had been bashed and bruised all over.

But she was safe. Alex forced herself to breathe slowly.

There was no fire.

Even better, there were none of them.

Alex surveyed the unfamiliar room. It looked like a hospital. There was a band on her right wrist with her name and the name of a doctor she didn’t know.

Mark was dead. Alex knew that with complete certainty, although she didn’t want to think about why or how she knew. And the hidden lab of Gilchrist Enterprises, the focus of her life for the past five years, had been destroyed by fire. The Green Machine had been trashed, right before its big moment. Alex knew that, too, and it still made her angry.

The fire hadn’t been an accident.

That made her even more furious. Only someone evil could have destroyed something so good. Only a truly awful person could care more about money than the planet itself. An image of that evil rose in Alex’s thoughts, but she shoved it aside.

She might be down, but she wasn’t out yet.

Before she could look for a calendar or chart, Alex heard voices approaching. She did what she had always done when there was trouble brewing: she feigned innocence. She closed her eyes and pretended to be asleep.

“She’s had a quiet day today, at least,” an older woman said, compassion in her tone. “Although she usually has her nightmares around three in the morning.”

“Every night?” asked a man. There was no real interest in his tone.

“Every night,” the woman replied. Alex felt a stroke on the back of her hand. “It’s wearing her out, poor thing.”

“It says here that she talks about dragons,” the man said and Alex’s breath caught at the word.

Dragons. Her breath hitched and she struggled to remain impassive. The hair was prickling on the back of her scalp.

“She does,” the woman said softly. “She screams and thrashes, and she shouts out for Mark. Then she cries.” The nurse stroked the back of Alex’s hand. “It’s terrible to watch.”

“Well, she needs sleep to heal,” said the man crisply. “We’re going to kick up the dosage on the sedative. Put it in her drip tonight and see if we can avoid tonight’s nightmare.” Alex heard him scribbling. “And I’m going to move her over to Psych for observation.”

“But you can’t transfer her to the Psych ward! She’s just traumatized and who wouldn’t be…”

“When I want your opinion, Nurse, I’ll ask for it,” the man interrupted. “It’s the twenty-eighth already. Her burns are healed and we need the bed.”

It had been October 14th when she and Mark had driven to the lab and found it burning. The fire had happened on a Sunday, the first Sunday they’d taken off in years.

Alex knew sabotage when she saw it.

She’d lost two precious weeks. If this was midnight on the twenty-eighth, there were only three full days left before the Green Machine’s big chance.

She could make it happen.

A piece of paper tore and Alex heard footsteps as the man walked away. “Who’s next?”

“Poor thing. I would have given you another couple of days.” The nurse gave Alex’s hand one last pat. Then she strode after the doctor, the soles of her shoes squeaking on the linoleum floor.

The best way to avoid the transfer was to leave, and to leave when her move was least expected.

The nurse was getting more sedative to put in her drip.